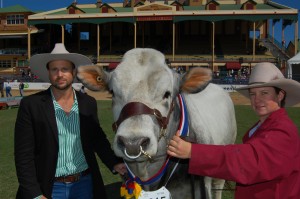 The Wyoming Romagnola Stud was delighted with their wins at this years Brisbane Royal Show (the Ekka) taking out the top award of Grand Champion Romagnola Bull with Wyoming Doctor Nelson.  Doctor Nelson’s dam, Wyoming Tessa was also a grand champion of the Ekka some 8 years earlier winning the top female award at the studs first ever outing at the Ekka.