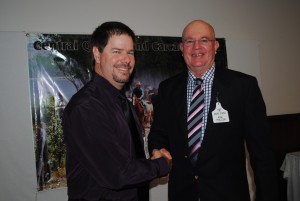 Ron receiving one of our awards on the night

In July 2010, we entered cattle in the CQ Carcase Competition.  This competition was established in 2008 primarily due to the fact that the commercial section of the Rockhampton Show folded due to lack of support from certain local sectors.  Some producers wishing to keep this popular competition running got together and formed a committee to have a new carcase competition established.  Sponsors were keen to be part of this new competition and Teys Brothers came on board which allowed the cattle to be processed at Lakes Creek Meat Works.

The competition proudly supports the local community with the main beneficiaries being P. and C. Associations of four small country schools and the committees of two small country shows in the outlying area. We decided to take part in the competition this year after hearing about it and entered steers in two classes:

With only 8 head, we were placed 3rd in Class 5 and 1st and 3rd in Class 6, with all steers being Romagnola/Brahman cross.  A real boost to the evening was the announcement that one of our steers in Class 6 had the largest eye muscle of all the cattle in the competition at 117sq. cm.  Although not on the prize list, was definitely worth a mention!