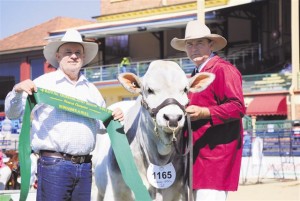 With the help of Terry Connor of Timbrel Cattle-Fitting Services we were able to have our cattle on display and in the judging rings at various local shows throughout Central Queensland, as well as the Brisbane Royal Show (the Ekka).

Senior bull Wyoming Emmett and junior bulls Wyoming Francisco and Wyoming Fireman provided cattle produces with a great opportunity to see the up and coming sires of the Romagnola breed taking out Senior and Junior Champion ribbons at various different shows including Roma, Rockhampton, Finch Hatton, Mackay and Proserpine to name a few.