“The ANZ National Beef Carcase Competition appraisal system utilised in the competition has been specifically designed to meet both export and domestic market requirements and utilises the latest technology available to the beef industry. The competition aims to provide producers feedback on compliance of beef carcases to market specifications, yield of saleable meat and predicted eating quality of those carcases. The competition has been developed from the Australian Beef Carcase Appraisal System (ABCAS) by the National Beef Carcase Competition Committee of BEEF AUSTRALIA 2021. The subcommittee is composed of beef industry representatives, practitioners, processors and Meat and Livestock Australia (MLA).” – Beef Australia 2021.

“Nutrien Livestock Commercial Cattle Competition provides producers with a unique opportunity to benchmark their stock against national standards, to gather feedback from experienced judges and identify areas where they can continue to improve to ensure our industry remains productive and profitable.” – Beef Australia 2021.

Our 2020 Sale Bulls are Ready for Delivery One of our 2020 sale bulls available for sale

With some much needed widespread rain throughout the start of the 2020 calendar year, we thought it would be a good time to remind people about our bulls available for sale.  A selection of both full blood Romagnola bulls and Red Brahmagnola bulls from weaning age to 2-year old are available and located at our Rolleston property “Mira” ready for immediate delivery to you.

Given the COVID-19 (Coronavirus) outbreak around the World and the State/ Federal Government restrictions currently in place, we understand that some people may not physically be able to inspect our bulls at this time. As always, we are happy to send photographs, videos and also select bulls on your behalf.

We hope everyone remains safe and well during these increasingly difficult times.

For the first time since the year 2000, Wyoming Romagnolas have decided not to display and exhibit cattle in the stud cattle section of Beef Australia, deciding to instead focus on our commercial cattle.

This year we have again proudly nominated 65 head across both the ANZ National Beef Carcase Competition and the Ruralco Commercial Cattle Competition.  All cattle in these classes are home grown Romagnola/Brahman cross steers and heifers.

Adding to our support for the event, Ron will also be in the main ring putting his knowledge and experience from both our stud and commercial operations to good use judging the Bazadaise/Bazadais, Senepols and Square Meaters.

We hope that the week will also allow us the opportunity to catch up with many friends and clients who will also be attending Beef Australia 2018. 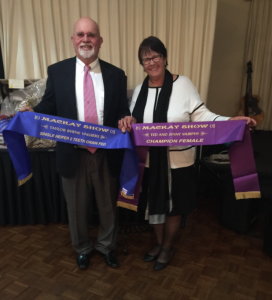 With only two head nominated in the commercial section of this years Mackay Show, we were happy to be successful in placing 1st in the Single Heifer 2 Teeth Grain Fed section before the same heifer took out Champion Commercial Female of the Show. 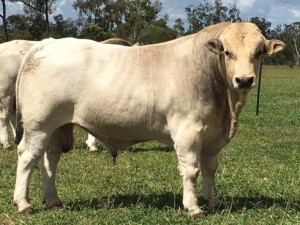 Wyoming Romagnolas will be selling 4 Romagnola bulls and 8 Brahmagnola bulls (6 polled) at the Richmond Field Days “Bulls of the North” All Breeds Sale at 1pm on Friday the 9th of June 2017 at the Richmond Showgrounds.  These bulls are available for inspection now and will sell as Lots 19 to 30 inclusive.

All bulls will be vet checked, weighed, semen tested and have been vaccinated for 5 in 1 and Botulism.

Photos of  a selection of these bulls can be found on the “For Sale” page of this website, or for more information on these bulls or any other bulls that we may have for sale, please call Ron on 0429 156 178.

Looking to the Future of Beef Technology 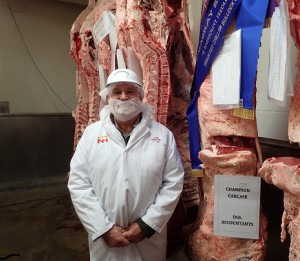 Ron with one of his Champion Carcases

Nebo beef producer and principal of Wyoming Romagnolas, Ron Pullen, says the question cattle people should be asking themselves at present is –  how will my slaughter cattle rate be altered with Meat & Livestock Australia’s (MLA) revolutionary plan to install Objective Carcass Measurement (OCM) technology across the red meat industry?

Mr Pullen thinks this technology may well be closer than most people think.

“The Dual Energy X-Ray Absorptiometry (DEXA) technology is planned to go into 90 slaughter facilities across Australia with MLA borrowing $150 million to do so,” he said

Cattle producers who wish to maximise their returns will have to seriously look at their genetic herd make-up.   The Pullen’s operation has a strong commercial focus and Mr Pullen believes that cattle people who have been producing high yielding slaughter cattle will at last be paid for their efforts.

“As a producer, I cannot wait for the day when I will be paid for those kilos of saleable beef my animals may produce, and move away from the old system where you are paid for carcass weight.” he said.

“I feel the present system has served the industry well over the past several decades, but we need to move on to be a more competitive exporting force.”

Over 15 years ago, Ron Pullen and his family participated in VIAscan trialling.  The intention was to use the technology to estimate the saleable beef yield.  The bullocks that were trialled were a large number of Romagnola/Brahman cross that were bred from the Pullen family’s high content Brahman breeder herd by their Wyoming Romagnola stud bulls.

Mr Pullen said the result was outstanding, with the consignment yielding several percent higher than what Researchers considered as a top end percentage.

“We have continued to breed Romagnola/Brahman cattle using our home bred Romagnolas and have sold 2000 of these fat cattle during the 2016 calendar year.  Coupled with a reasonable season, best beef prices in my 45 years in the industry and the present system – weight for age – I believe it was a result very few people could match.  I am extremely satisfied that I have continued to follow my belief in Romagnola genetics as I feel that we will continue to see the benefits of the breed in crossbreeding programs as these new technologies start coming into place.” Ron said.

*Story written by Ron and James Pullen and published in the Queensland Country Life as “Pullen All For Future Beef Technology”. 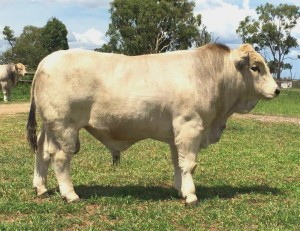 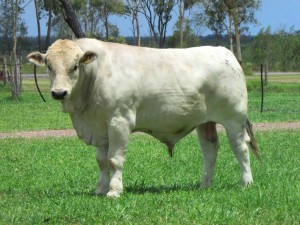 Wyoming Romagnolas will be selling 8 quality stud registered Romagnola bulls at the Rockhampton February All Breeds Sale on Day 2, 15th of February 2017 at the CQLX, Gracemere.  These bulls are available now for inspection are selling in the ring as Lots 427 to 434 inclusive.

All bulls will be vet checked, weighed, scanned, semen tested and have been vaccinated for 5 in 1 and Botulism.  All information will be available to interested buyers on the day or by contacting us directly in the week leading up to the sale. 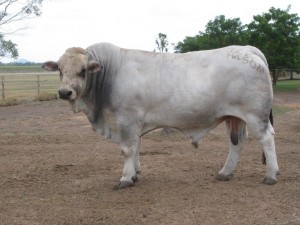 Wyoming Romagnolas would like to thank the Warrian Family, Stevens Family and Rockemer Family on the purchase of our bulls at the Rockhampton All Breeds Bull & Female Sale 2016.

All five (5) bulls sold under the hammer for a $4,400 average with our Beef Australia Reserve Senior Champion Bull, Wyoming Huxley, topping the draft at $5,500.

Anyone who may have missed out on securing one of our bulls at the sale are welcome to inspect our draft of paddock sale bulls that are available for immediate delivery.  Please contact Ron on 0429 156 178 for further details.