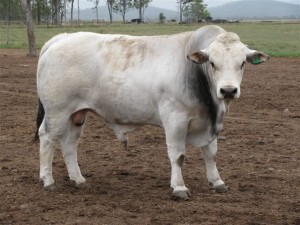 Following a successful year on the show rings of Central Queensland and most recently at the Brisbane Ekka with our stud cattle, we will be stepping out at the Cloncurry Expo with a top-quality line of Romagnola and Brahmagnola herd bulls.

We have had our cattle on the show circuit of Central Queensland this year with cattle-fitting operator Terry Connor, and have seen the cattle do well and gain plenty of interest.  However, what really excites me is the end product and competing in the trade cattle sections of various shows.  We have found that our Romagnola-cross cattle have been getting a lot of attention and meeting a lot of the right criteria not just in these competitions but most importantly with our local beef processor Borthwicks in Mackay.

Like many cattle producers around Queensland our family have been affected by the ever expanding mining industry, and we have seen the effects on the northern graziers when the live export cattle ban was in place.  Being a cattleman in Queensland comes with plenty of distractions and tends to consume our lives with what seems to be an endless list of problems.  For us it is certain we will lose our 12,700 hectare home and cattle property to a new coal project and I fully understand the anguish and despair that cattle people in northern Australia have in regard to live cattle export.  There may well be a resolve at the moment, but the agenda is still there from many politicians who are committed to the banning of live cattle exports within three years.

We truly believe the current Government will not do the cattlemen of Australia any favours – especially as a minority Government or with their alliance with other political parties.  As cattlemen, we are a minority group ourselves with poor industry representation and next to no lobbying ability.  The live cattle export industry certainly has been a marvellous market for many northern Australian cattlemen.  In fact, without being critical, we have seen the majority of the northern Australian cattle industry locked into one single market – the live export market.  Living in Central Queensland, as we do, the emphasis is on processed beef, which gives many more market options.  It may be great to have market diversity, but it is no good unless you have an animal which will achieve the objectives.

We have been breeders of Brahman cattle for 40 years and we are very aware of what the Brahman has done for the northern and central cattle industry.  We have to listen to what the crop or grass finishers, the feedlot operators and the meat processors are telling us.  The common theme is that they all want an animal to grade into their target markets.

As beef cattle producers, we have found that Romagnola bulls over Brahman cows have given us the greatest market diversity.  We have clients who buy Romagnola bulls to crossbreed with their live export cattle.  If the live cattle export has a hiccup, these cattlemen are in a good position to truck the cattle south where they will bring a premium over the general run of northern export cattle.

We are looking forward to bringing a number of Romagnola and Brahmagnola bulls for display and private sale to the Westpac Cloncurry Expo.  We have confidence in the Romagnola breed and feel North West Queensland has a lot to gain from crossbreeding with them.