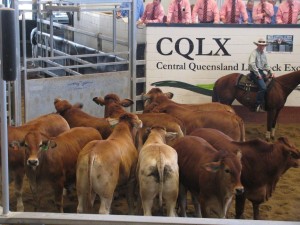 Beef Australia once again proved to be a successful event for Wyoming Romagnolas with success in the commercial and stud cattle competitions as well as the popularity of our Trade Site 151.

Our site which contained a pen of unled bulls and our show team was extremely popular with visitors to Beef Week.  We received plenty of enquiries during the week and also had many visits from clients and society members.  We were delighted to sell several of our display stud bulls as well as our Beef Australia Reserve Senior Champion Bull – Wyoming Fireman.

In the show ring we claimed many broad ribbons including:

Though the highlight of the week for us came when we won second place in class 6 (Pen of Three Export Chiller Bullocks Grain Fed 300kg-420kg) in the ANZ National Beef Carcase Competition with our Romagnola/Brahman cross steers – missing out on first place by only 0.08 of a point, with the three criteria for selection being made up of MSA Eating Quality, Market Specification and Saleable Meat Quality.

With over 336 head nominated in the national competition and entries coming from as far as Tasmania and Western Australia, the competition is unbiased as the judge has no knowledge of the breed or ownership meaning that the points are awarded purely on the set criteria.  We felt this was the pinnacle of the event as this is what we as cattle producers are striving to achieve – a quality end product for the consumer.

We have found that many of our bull buyers have also been seeing these great results in their crossbred cattle and we think this gives a good indication that the Romagnola will do what beef producers need in their cross breeding programs.

We are looking forward to Beef Australia which will come around again in 2015, but for now our show team will be on the Central Queensland show circuit and will be attending Richmond Field Days 15-16 June 2012 with a team of bulls that will be on display and available for sale.